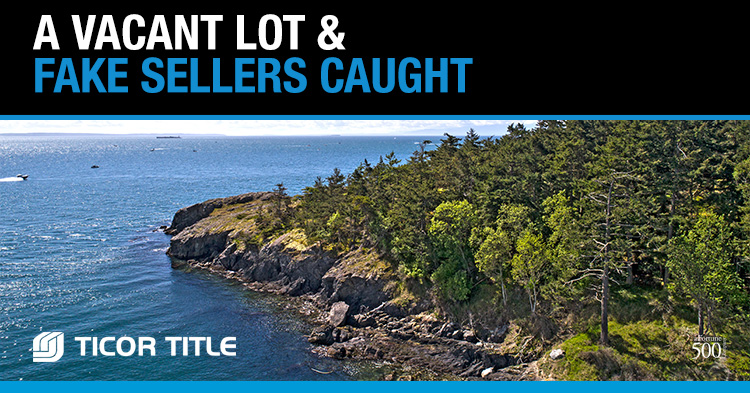 Teri D., Closing Officer at one of our agencies, was processing a sale of a vacant, waterfront lot. The sales price was $205,000; a cash purchase. The purchaser paid $5,000 as earnest money and was working with a builder on plans to build a home on the lot.

Since the property was a vacant lot Teri realized the seller’s mailing address would be different than the property address; her office has an added precaution in place where the address provided is compared with the address for the tax bill on the tax assessor’s website.

Confirmation & Connecting with the Sellers

Teri discovered the vacant property address was different than the tax bill address. She sent a letter to the seller at the address listed on the tax bill introducing herself, her company and asking the seller to contact her to confirm the sale of the lot. The buyer was not obtaining a new loan so about a week later they were ready to close. Teri prepared the closing documents on Friday, March 31, 2017. She contacted the listing agent to find out where and how she should send the closing documents. The listing agent advised her to email the closing documents to the seller. Once again, in an effort to ensure there was no funny business going on, Teri also sent the documents via overnight delivery to the address on the tax bill. Everything was sent on Monday, April 3, 2017.

“They told him they were not selling their lot…”

On April 5, 2017, the real owners of the vacant lot called the Agency and asked to speak with the President. Brice C. took their call. The owners explained to Brice they received a letter and overnight package from his company. They told him they were not selling their lot and did not have it listed for sale. Further, they stated they already explained this to the listing agent on March 24, 2017. That was twelve days ago. Teri wondered why the listing agent did not tell her that when she called on March 31, 2017?

Questions for the Listing Agent

Brice called Teri into his office to share what he learned. She immediately called the listing agent to notify him the real owners just called her company’s president. She asked him why he did not tell her he spoke to them on March 24, 2017. The listing agent explained after receiving the email about the property, unbeknownst to him, he asked the fake sellers for identification. They showed him their passports. He asked for copies and they gave him copies. It never occurred to him they were false.

The real owners had forwarded their email exchange with the listing agent to Brice, where they confirmed they were the owners of the lot and were not interested in selling. Teri also asked the listing agent why he provided her with a different email address for the seller than the one he received from the real owners who communicated with him. He simply huffed at her. Was he really going to let this deal close knowing all of this? She will never know.

Fortunately for Teri this agent does not usually do business with her. It was the selling agent who encouraged the buyers to select her as their closing agent. The company resigned from the transaction.

Teri recognized the risks associated with sales where the property owner is absentee. Simply checking the tax bill and sending a notice to the address listed on the bill saved the agency and the underwriter from a potential claim.