A Surprise Wife, a Missing Seller, and an Uncooperative Beneficiary…

RaeAnn F., an escrow officer in one of our sister branches, opened a sale transaction. The sales price was $214,500. The seller held title as a single man and the title report revealed only one lien against the property. The beneficiary listed on the lien was an individual.

RaeAnn obtained the beneficiary’s contact information from the seller and called him several times. When he finally responded he directed her to work with his protégé, Paul. RaeAnn explained what she needed in order to pay the loan off at closing; the payoff demand, original note, deed of trust and request for reconveyance. Upon receipt of the documents RaeAnn noticed a 50% interest in the note was assigned to a self–directed IRA – for benefit of Paul’s wife!

RaeAnn informed Paul she needed to speak with the custodian or trustee of the IRA. The custodian was very confused and unsure what to do, but did require an assignment to the deed of trust be signed by the original beneficiary and recorded. The escrow officer, buyer, new lender and seller all waited until this was done and an updated prelim could be issued. After several weeks RaeAnn finally obtained all the documentation she needed to pay off the loan. The whole time she received pressure from the seller to close.

The seller was planning on leaving town so he made an appointment to come in and sign his closing documents early. At the signing, he and his real estate agent talked about how they were both leaving town. The seller was leaving for Las Vegas and the agent was heading to China. Something they said in their conversation made RaeAnn question the seller’s marital status. She asked him if he was married and he said no, but not with confidence. RaeAnn was suspicious, but he signed an affidavit confirming his marital status so the document was accepted.

The liens were for the benefit of the State Board of Equalization and against the seller’s wife. The amounts due were just over $62,000. RaeAnn called the seller and left a message stating she needed to discuss an interspousal deed and additional liens which would have to be paid.

Tommy told her the seller’s wife has been appointed as his attorney–in–fact so RaeAnn should contact her. Knowing she needed to have the wife sign an interspousal deed, RaeAnn contacted the wife to schedule an appointment for her to come into the office. RaeAnn knew she was going to be pressured into allowing the attorney–in–fact to sign the final closing statement. She was very uncomfortable since the new liens being paid would financially benefit the wife. Additionally, she did not understand why the seller could not be contacted. All she needed was a fax number or email to send the closing statement to him. She did not need an original signature. RaeAnn contacted National Escrow Administration for a second opinion. The Corporate Escrow Administrator agreed with RaeAnn’s concerns. Armed with the backing of National Escrow Administration she confronted the wife when she came in to sign the interspousal deed.

Then RaeAnn asked her where her husband was. The wife finally admitted he was arrested and being held in a New York jail!

RaeAnn looked the wife in the eye and asked her if they were married or not – pointing out the language included in the POA which stated they had been married since 1996. The wife explained they had a civil ceremony and they never signed or filed a marriage license. At this point they assumed they were married by common law. RaeAnn explained to the wife in order to proceed she would treat them as if they were husband and wife and have the wife sign a deed conveying her spousal interest. Then RaeAnn asked her where her husband was. The wife finally admitted he was arrested and being held in a New York jail!

A search for federal liens

RaeAnn called National Escrow Administration to provide an update. The Corporate Escrow Administrator pointed out the Company needed to know if this property was subject to seizure or a RICO lien. In order to insure the new owner, the Company needed confirmation there was not a lien filed and whether one was going to be filed against the property. In the U.S., federal agency liens have priority over purchase money mortgages and are good for 20 years.

The Corporate Escrow Administrator consulted with Rod Pasion in Underwriting to ensure we were taking all measures to safely insure the buyer and new lender on this sale. Rod explained the U.S. Attorney’s office met with the title insurance industry years ago, and they agreed to promptly record their notice of seizures. Since then they have been quite diligent in timely recording their notices.

As an extra precaution the Corporate Escrow Administrator called the U.S. Assistant Attorney and confirmed they had already filed liens against the properties they intended on seizing. If a lien was not of record, it was not a property they intended to seize. RaeAnn emailed her title officer asking him to bring the title search to date to confirm there was not a seizure notice recorded against this property.

There was no seizure notice, but another lien against the wife showed up; an IRS tax lien for just over $13,000. The buyer had just signed loan documents, for a second time. The lender indicated the lock on the loan would expire in two days.

RaeAnn delivered the latest update to the buyer, his real estate agent, the loan officer and the listing agent who had just returned from China. She explained it would take a few weeks to obtain a payoff statement from the IRS, assuming the deal would be dead since the buyer’s lock was expiring.

RaeAnn was wrong about the deal being dead. All the parties agreed to wait. The buyer really wanted the house and the seller needed to sell. RaeAnn ordered the payoff from the IRS and everyone waited for it to come in. The seller’s attorney was also on standby to obtain the seller’s signature on the final closing statement along with the IRS payoff.

Although this story had several twists and turns – starting with an uncooperative beneficiary, then a surprise wife and finally a missing seller – RaeAnn made very reasonable requirements in order to proceed with the closing and protect the Company.

RaeAnn received a lot of pressure from both the seller’s business partner and wife, who tried to hide where the seller was. They kept indicating the wife could sign since she was appointed as the seller’s attorney–in–fact. Since the seller told RaeAnn he was single, and even signed an Affidavit confirming this, RaeAnn wanted to be sure he was fully aware of the fact she knew he was married and would be paying off his wife’s liens with the proceeds from the sale.

Lastly, she worked with the seller’s attorney, the National Escrow Administration team and title to ensure the property was not in danger of being seized in relation to the charges the seller was facing. For her persistence and careful attention to all the issues which came up in this transaction RaeAnn has been recognized and rewarded.

It’s been a couple weeks since we relocated our Seattle escrow branch. The old location on Eastlake Avenue moved to West Lake Union Center on the corner of Westlake Avenue N and 8th Avenue N. We’re settled in and still very excited about the improved space, better parking, easier access, and upscale experience for our clients.

All are welcome to pop in and check out the fantastic new office, but in the mean time we wanted to share a quick video tour and photo gallery. We’re confident that buyers, sellers, real estate agents, and lenders will appreciate the improvement.

We look forward to seeing you soon!

The second quarter results continue to highlight the earnings power of our title business. With an improving residential purchase market and strong refinance order closings, we were able to generate a 16.5% pre-tax title margin, nearly equal to that of full-year 2003 when adjusted for the difference in the provision for title losses between the time periods. Our mix of business shifted toward purchase transactions during the quarter, with April at 39%, May at 40%, and June at 48% of total transactions.

The second quarter results continue to highlight the earnings power of our title business. The LPS acquisition will create an even larger, broader, more diversified and recurring
revenue base for FNF going forward. 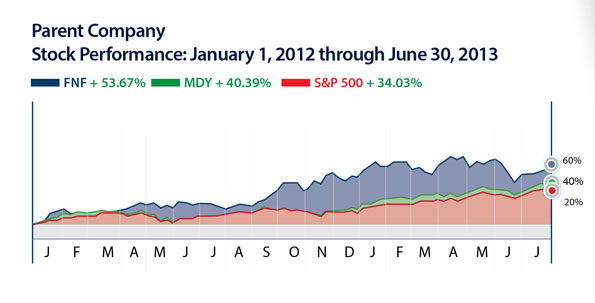