Monthly archive for May 2014

Please join the Chamber of Commerce, local dignitaries, and members of the public for a midday celebration as Ticor Title is officially welcomed into the Federal Way community.   We look forward to celebrating our newest location with you. 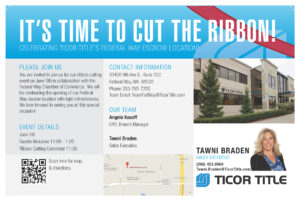 All Cash Transaction Down to the Wire…

Ensuring we have unconditionally collected funds prior to disbursing on a real estate transaction is one of the most basic duties of the settlement agent. Wired funds are the best way to accomplish this. Funds sent via wire transfer are already collected by the bank; once the funds are credited to the trust account, they are immediately available for withdrawal.

Cashier’s checks take at least 24 hours, and often longer, before they are unconditionally credited and we have received more than our share of fraudulent ones. In a perfect world, wires would be all we would accept for closing funds.

This story emphasizes the importance of ensuring buyer’s closing funds are unconditionally collected.

An All Cash Offer 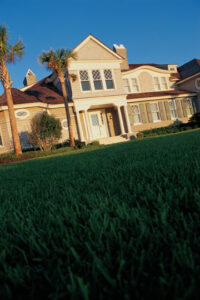 In 2013, one of our sister branches in Dallas was in the process of handling the closing of a $450,000 sale transaction. The sale was a spec home built by a builder, who was a regular customer. The buyer made an all cash offer and the seller quickly accepted. The transaction was scheduled to close two weeks later.

On October 31, 2013 the buyer came in to sign his closing documents. He brought his wife with him, although he was purchasing the property sole and separate. The signing went quickly. The buyer was only there for about 10 minutes.

In that short amount of time the buyer and his wife complained about how they had been living in a hotel, and kept asking when they could obtain the keys for their new home. They indicated they had already bought new furniture and could not wait to move in.

Escrow officer Andrea V. was handling the signing. The buyer assured her he wired in his closing funds. Andrea explained the bank had not yet received it and the seller would not release the keys until the funds were received and credited to our account. The buyer and his wife left.

All afternoon, the next day and even the day after that, the buyer and his real estate agent blew up the phone lines calling Chicago Title and the builder demanding the release of the keys.

Over and over again Andrea and her escrow assistant, DeAnna, verified the wire had still not arrived. The buyer provided a federal reference number in his attempt to prove the wire had been sent.

DeAnna contacted the Operational Accounting Center (OAC) with the number. The OAC contacted our trust bank, referencing the number provided by the buyer in an attempt to track down the buyer’s closing funds.

Our bank had no record of a wire request from the buyer. In fact, our bank discovered the federal reference number provided by the buyer was not valid at all!

Where Did The Money Go?

Andrea decided to confirm the wire instructions the buyer used. She discovered the builder gave the buyer outdated instructions for an old account which was now closed. The buyer was furious and demanded the builder release the keys to him. He wanted possession of the house immediately. He threatened to terminate the purchase contract. Then he said something no one believed.

The buyer claimed the bank told him his money was gone. He claimed the old account number was already assigned to someone new, the funds were transferred into their account and now they belonged to the new account holder.

The buyer claimed his bank told him it was no different than depositing cash into someone’s account and although the wire came through in the name of our company, they simply credited the funds to the account number and he was out of luck. He even went so far as to state his bank gave him the new account holder’s name and contact information so he could track them down.

The buyer tried to convince the builder this was their fault and claimed his bank representative said the recipient of his closing funds had no legal obligation to return the wire. He called Andrea and asked her if she would accept a cashier’s check. He purported he had a meeting set up with the account holder and would be getting his money back and wanted to remit his closing funds via cashier’s check instead of wiring them again. Andrea explained Company policy is only to accept wired funds but she would check with her manager and get back to him.

“She opened her browser to Google™ and entered the buyer’s name and immediately found a match – his mug shot!”

None of this made sense to Andrea. Her escrow instincts were telling her something was not right. She decided to do some research. She opened her browser to Google™ and entered the buyer’s name and immediately found a match – his mug shot!

According to the results of her search he had been charged with property theft. Andrea was smart. She did not share this information with the seller or real estate agents, but she did stick to her guns and told the buyer she would only be able to close upon the receipt of wired funds. A cashier’s check would not be acceptable.

The buyer claimed he wired his closing funds, again. The buyer and buyer’s real estate agent called many times a day for weeks to confirm receipt of the wire. The buyer demanded the seller release the keys to the house – threatening to cancel.

No one budged until over a month later, the first part of December. The builder sent the buyer a termination of contract. The buyer still did not give up. The buyer called the builder very upset. He could not believe they were terminating the agreement. He claimed his delay was over the recent death of his father.

The buyer explained he was going to open a new account at the same bank where our trust account is held. Once his new account was opened he would instruct the bank to do an internal transfer and deposit his closing funds into our bank account. Next he sent this receipt which was his way of trying to prove he opened the account with them:

The funny thing is: our account was never credited with the closing funds. The buyer and his real estate agent continued to call the builder and Andrea demanding the keys. He claimed the manager at Bank of Texas was going to call to confirm the transfer of funds.

Andrea gave him the name and phone number of her county manager, John T. She explained to the buyer the bank manager needed to speak with him directly. That was on December 3, 2013. She never heard from him again.

The builder and Andrea were baffled. What made him finally give up? What was he up to? Was he just trying to obtain possession of the house so he could squat there?

The builder contacted their attorney. Turns out in the state of Texas it could take up to six months to get a squatter out of your property. Once successful, who knows what condition the property would be left in? He could have taken the appliances, fixtures and anything not nailed down.

In the end Andrea and DeAnna did not back down from their operation’s policy to accept only wired funds. For their efforts they were recognized and rewarded.