The vesting on the open order sheet did not match the vested owner of record. That is not an unusual discovery in the title industry, but this time it triggered the title examiner to dig deeper and to uncover a forgery! 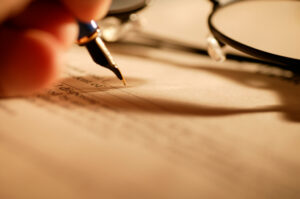 One of our sister branches in Denver opened a sale transaction in the amount of $450,000 and ordered the title report/commitment. The title examiner, Venita O., noticed the open order sheet reflected the property owner as an Estate of a named individual. The most current deed, however, reflected the owner as an LLC.

A Forgery is Suspected

It had been seven years from the date of the deed of trust to the most recent deed and signatures. Signatures change over time, but the discrepancy was drastic. Venita was even more suspicious the deed to the LLC might contain a forged signature for the decedent.

Venita contacted her title underwriter, Andy B. He agreed the signature on the deed had to have been forged. He advised Venita to prepare the title report showing title vested in the Estate and the LLC.

Venita prepared the report showing both entities and called for a deed from the Estate and the LLC. She created a second requirement for the death certificate for the decedent, as well as the organizational documents for the LLC. She noted under the requirements the documents would have to be further reviewed by underwriting prior to closing and insuring of this transaction.

When the listing agent and the attorney selling the property and settling the Estate of the decedent received the report they were shocked. Not only was the decedent a client of the attorney, but he was also a former colleague. The decedent had been a partner at the same law firm.

Putting the Pieces Together

The attorney knew the decedent had not deeded the property prior to his death. The deed was executed in May 2013 and the decedent died in June, which raised more questions so the attorney began to investigate who signed the deed.

The attorney started with the notary – who would not return his calls or mailed requests for more information. After much investigation, the attorney discovered the managing member of the LLC is currently serving time in the big house for forgery and a list of other crimes. The listing agent and the attorney were thankful to Venita and our company for catching the forged deed and showing the additional requirements on the deed.

The attorney is working to file a Quiet Title Action to remove the effects of the forged deed, so he can sell the property. He also contacted the secretary of state to report the notary’s bad deeds and requested her current address so he can take further action against her.

For Venita’s detection of the forged deed she has been rewarded and has received a letter of recognition on behalf of the Company.

Venita’s discovery did not prevent a crime. The crime in this story had already taken place. Her keen examining skills provided notification to the attorney settling the Estate of the forged deed on title and enabled him to act swiftly to take corrective measures. When the property’s title is cleared and the property is ready to be sold, we are confident the attorney will be sure to place this and all future title orders with our company.