Monthly archive for May 2013

Short pay lenders are serious about the principals upholding the terms and conditions placed on them by the short sale agreement. One of the most common conditions reads, “The property will not be sold within 90 days of the closing date of the subject real estate purchase contract.” Short pay lenders enforce this condition by checking the chain of title post–closing to verify the property owner matches the buyer shown on the settlement statement provided them at closing.

An escrow officer at one of our sister companies closed a transaction July 31, 2012. The Realtor® completed a Short Sale Affidavit spelling out the above condition not to resale the property for 90 days. The seller signed the affidavit, as did the real estate agents – but not the settlement agent or the buyer. Their information was printed on the affidavit but their signatures were never rendered. On September 27, 2012 (just 57 days later) the same escrow officer closed a subsequent sale of the subject property to a new buyer.

Months later the escrow officer was working on another unrelated short sale transaction with the same lender. The agent was notified by the short sale processor of the following message, “All of our files are sent through quality review and the settlement company and agent do not meet our quality review guidelines. You will need to submit documents with an alternative settlement agency. Thank you.”

We approved a short sale for a loan that was secured by the property located at 7519 Paradise Drive, Anytown, USA. The HUD–1 shows that this transaction was closed by an escrow officer of FN Title on July 31, 2012. All parties to the transaction, including the escrow officer, signed a Short Sale Affidavit in which the parties agree not to sell the subject property within 90 days of the close of the short sale.

However, public records show that the buyer from the short sale sold the property to another entity on September 27, 2012. A copy of the Grant Deed from the September sale was notarized by the escrow officer.

Wells Fargo Home Mortgage has concerns with business practices that may place us, our customers and/or investors at greater risk of loss in connection with short sales – whether we are the servicer on the loan being paid off short, the lender on a new loan for the property or both.

The following business practices are unacceptable:

Wells Fargo expects that settlement agents closing its transaction will not engage in this type of conduct. For this reason, Wells Fargo has declined to use your services at this time.

The escrow officer is appealing the decision of the lender banning her from closing any further short sale transactions or new loans, since she did not sign the Short Sale Affidavit containing the condition not to re–sale the property for at least 90 days. In response to the escrow officer’s appeal, the transaction has been reviewed in greater detail only to discover additional discrepancies as follows:

When questioned, the escrow officer’s response to the additional discrepancies were that she felt the short pay lender’s approval of the HUD was sufficient approval for the changes.

Taking the measures listed below will prevent the settlement agent and their Company from being banned from providing settlement services.

If the settlement agent is closing a second transaction on the same property, they should demand to see the short pay agreement and all other documents to ensure the property can be re–sold within the timeframe of the new contract.

Sometimes a picture can communicate information much more clearly and quickly than words.  With that in mind, we’ve used diagrams and infographics here to answer common questions that our Escrow Officers, Title Officers, and Property Information Specialists receive.

This flow chart illustrates who now owns the property when an owner of record is deceased and single at death. Click the following link for more information: Probate Path – Single at Death 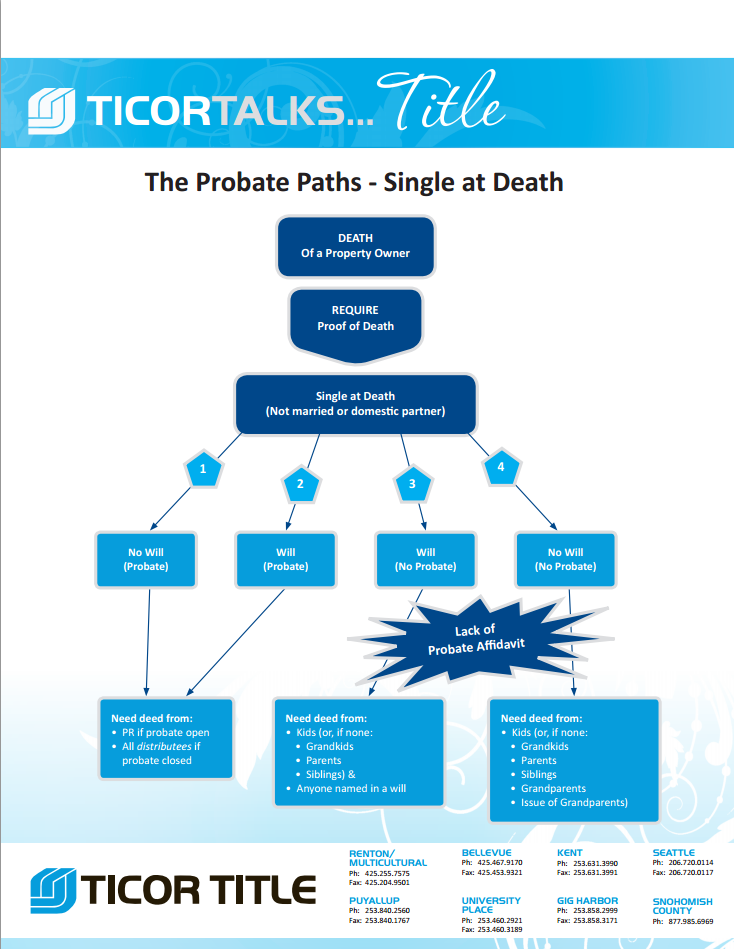 This flow chart illustrates the process of identifying who now owns the property in a situation where one partner is deceased and the real estate is considered community property.  Click the following link for more information: Probate Path – Married or Domestic Partner Community Property 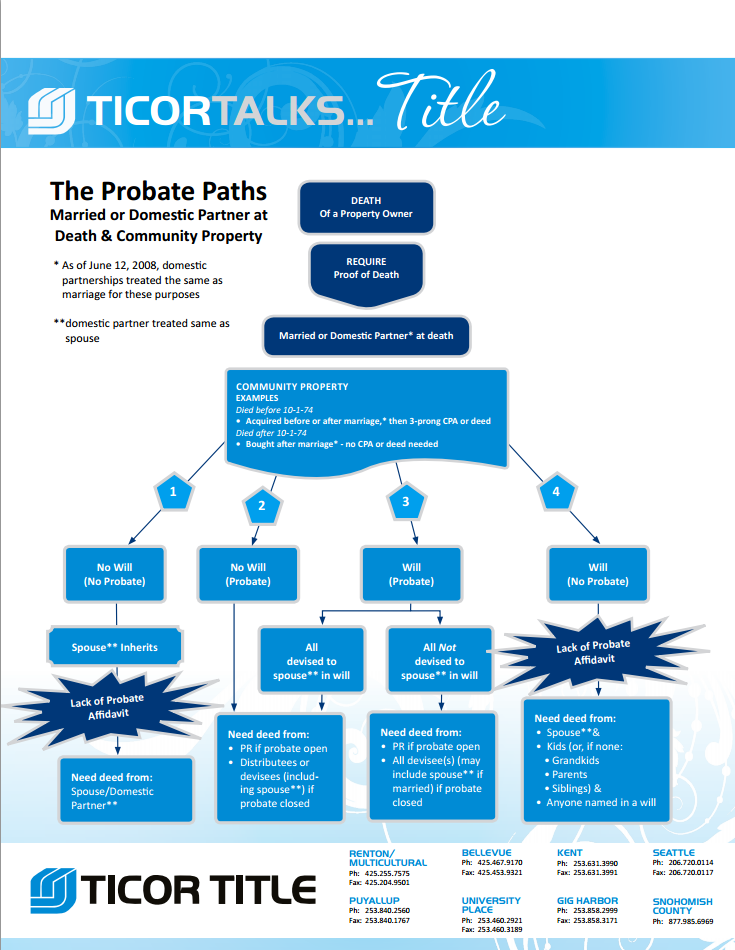 This flow chart illustrates the process of identifying who now owns the property when one or both partners is deceased and the real estate is owned as a separate estate.  Click the following link for more information: Probate Path – Married or Domestic Partner Separate Property 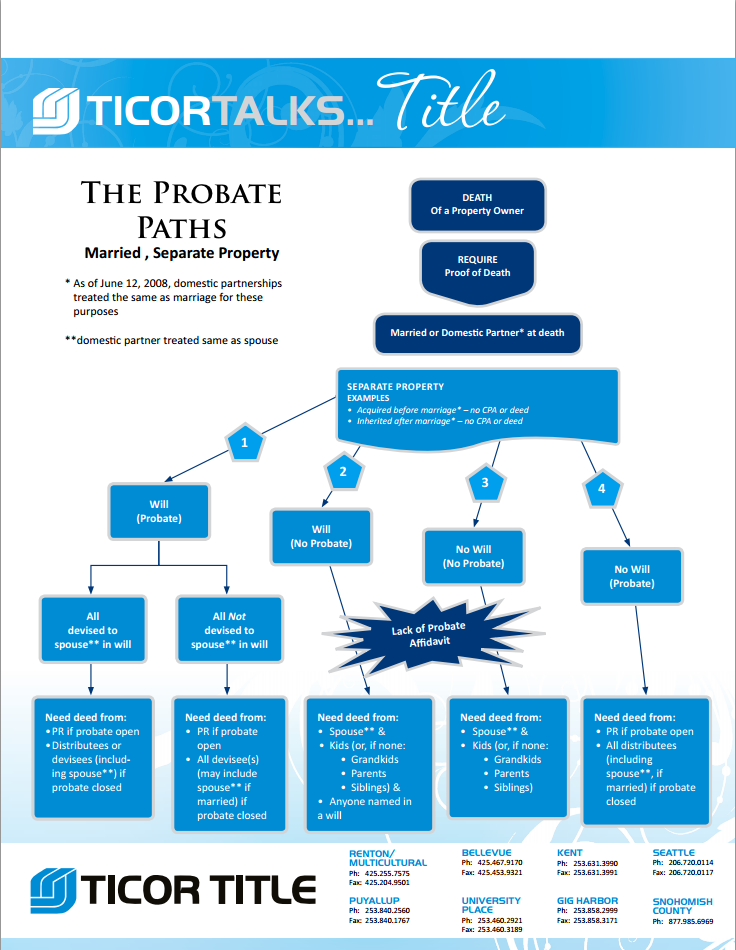 This infographic answers common questions relating to property taxes in Washington state, including how are taxes calculated, when they are due, and how taxes are prorated for buyers and sellers.  Click the following link for more information: Property Tax Annual Cycle 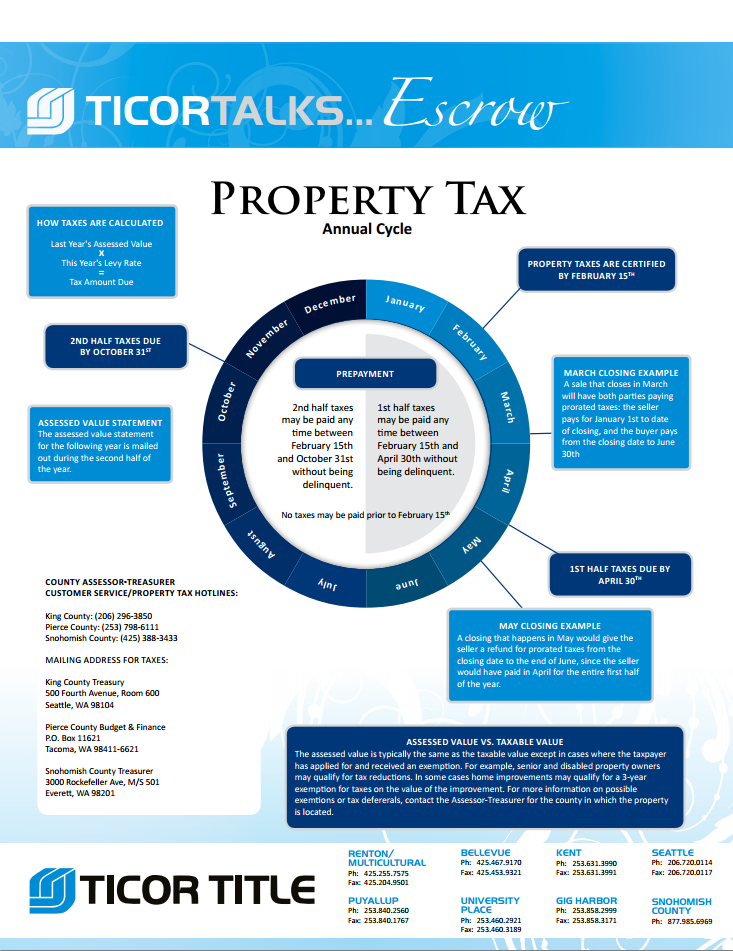 This infographic illustrates the timelines in escrow for purchases of bank owned properties.  Click the following link for more information: REO Transaction Process 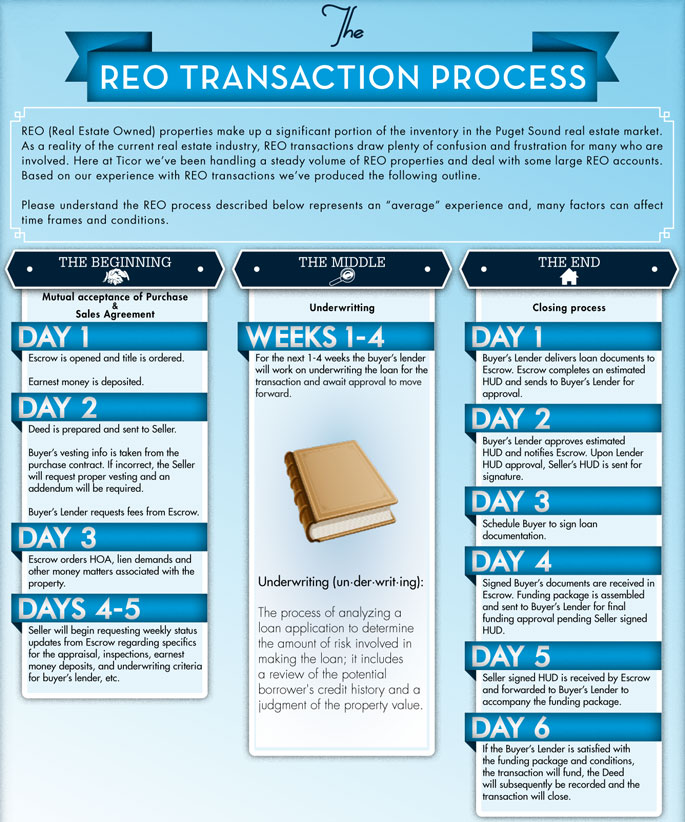 This flowchart depicts the complex process of filing for bankruptcy and includes the most common paths for chapters 7, 11, and 13.  Click the following link for more information: The Lifecycle of Bankruptcy

Announcing the Relocation of Our Bellevue Escrow Branch! 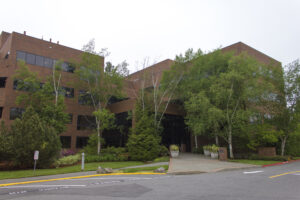 We are very pleased to announce that our escrow branch in Bellevue has relocated to a more upscale and spacious location!  Business is on the rise and with the increased business comes changes and the need for more space.

The new location is conveniently located just off I-405 at the SE 8th Street exit in the Gateway Building.

We think you’ll love the free parking, easy access from the street level, open look & feel, and of course the same friendly faces!

We are conveniently located in the Gateway Building just off 405 at the NE 8th St Exit. We offer easy access to the building with plenty of free street-level parking

When you arrive at Ticor Title in Bellevue you will be greeted with a smile, offered refreshments, and promptly escorted you to your reserved signing room.

At Ticor Title in Bellevue, Our team of escrow professionals is committed to ensuring that your Experience throughout the closing process is the finest possible.

If you have questions at any time throughout your escrow transaction please let us know. Thank you for choosing Ticor Title.